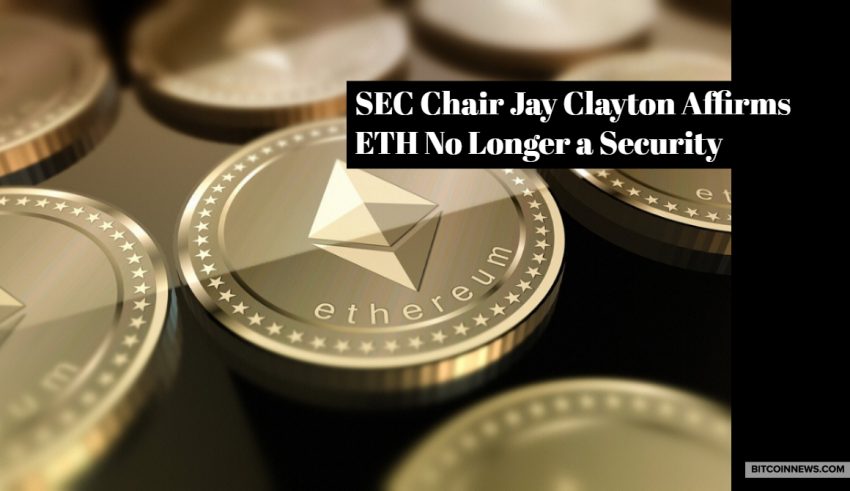 Jay Clayton, the US Securities and Exchange Commission (SEC) chairman, has backed up his colleague’s earlier analysis that the world’s second-largest cryptocurrency by market cap, Ethereum network’s Ether (ETH), does not qualify as a security.

Last year, SEC Director of Corporation Finance William Hinman made a similar statement, elaborating that Ethereum doesn’t exhibit the properties of a security. He added that he didn’t observe a central group as responsible for the cryptocurrency.

In a bid to clarify the issue, Congressman Ted Budd, along with industry advocacy group Coin Center, asked Clayton for a clarification, who now has responded that he agrees “that the analysis of whether a digital asset is offered or sold as a security is not static and does not strictly inherent to the instrument”.

Clayton elaborated in a letter that a cryptocurrency can be sold as a security if it meets the definition of an investment contract after the launch. But the digital asset can later be sold without being defined as investments. He added:

“I agree with Director Hinman’s explanation of how a digital asset transaction may no longer represent an investment contract if, for example, purchasers would no longer reasonably expect a person or group to carry out the essential managerial or entrepreneurial efforts. Under those circumstances, the digital asset may not represent an investment contract under the Howey framework.”

The letter did not point out Ethereum by name, however. Clayton’s latest observations echo his earlier comments, where he compared digital assets to tickets for a new theatre play. He explained how a group of investors might be offered “a suite of tickets” in return for funding the “play”, and then these tickets can be taken as securities. However, if the tickets are only sold to each theatergoer individually at a later date, “that’s decentralized”, which does not fit within the designation of securities.

Want to advertise or get published on BitcoinNews.com? – View our Media Kit PDF here.